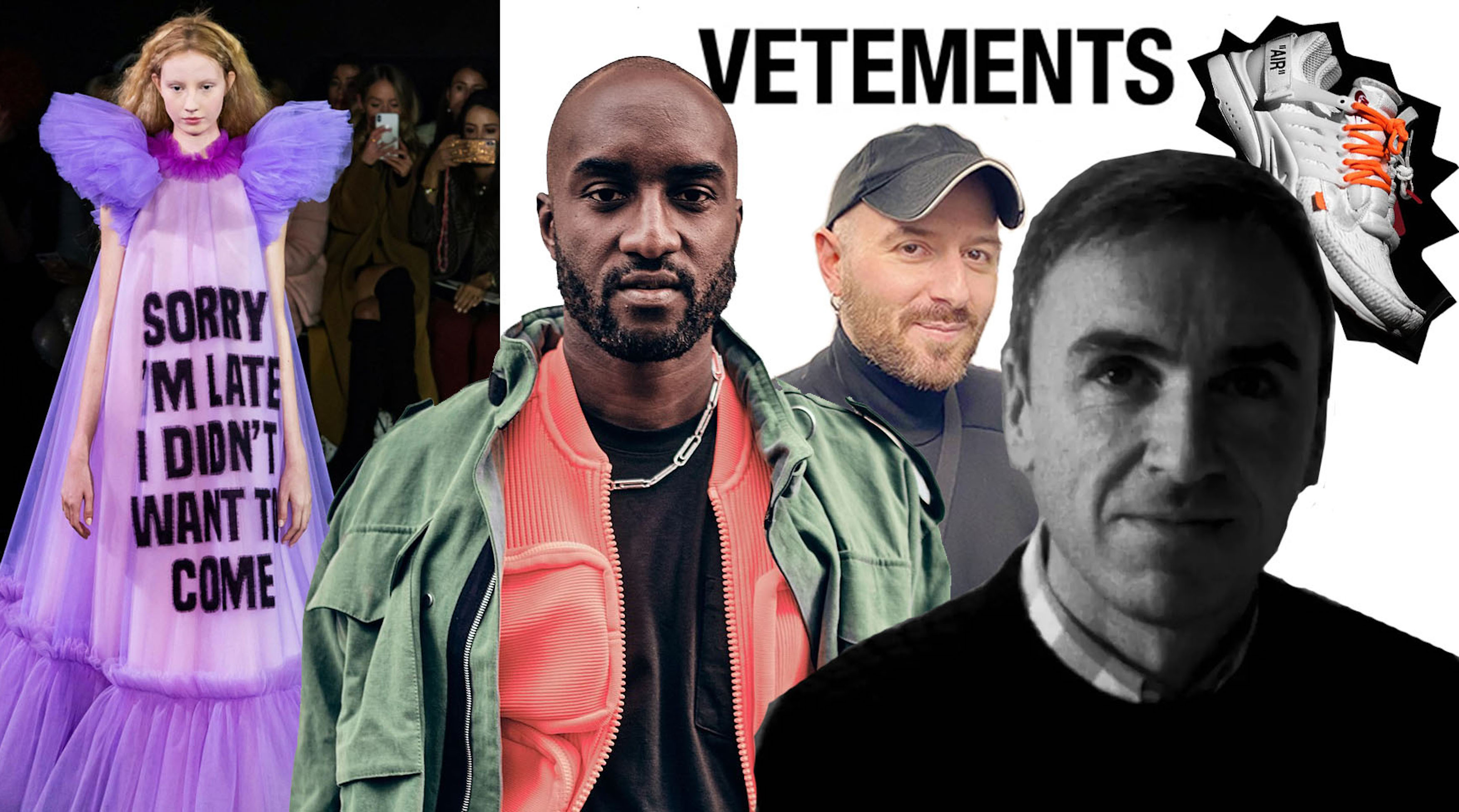 When it comes to fashion now, the boundaries are very simple. Go with what’s relevant, whether that is Climate change, Brexit or Netflix shows. The three, basically four, most relevant designers in recent years have all come from doing something unorthodox in the fashion/Haute-couture world but it has headlined them. Viktor Horsting & Rolf Snoeren, Virgil Abloh and Demna Gvasilia.

If we start with Viktor & Rolf, their Spring Summer 2019 collection was both pioneering yet amazing. Using quotes from Frida Kahlo, I am my own muse, and uplifting the #MeToo movement without any direct sponsorship; stating simple phrases of Female empowerment on such finely draped dresses. My personal favourites: ‘Sorry I’m late, I didn’t want to come’, ‘I’m not shy, I just don’t like you’ and ‘No’. You can say Viktor & Rolf manipulated the climate, or just heart-warmingly felt sorry for these women at the time of making a concept. Again, in this “climate” it is crazy important for the designers to fully undertake their concepts and its impact before acting and onto it. Viktor and Rolf’s mindset and practices are essentially different towards Tarana Burke’s (founder of #MeToo). Obviously, designers acting upon already relevant agendas can lose sight of the bigger picture but it’s another way of bypassing the main points and highlighting just the glitz and glamour, but then again, we are talking about fashion.

Virgil Abloh. There is so much you say and can’t say about this man. He PORTRAYS himself as a lazy genius, as a “made a t-shirt, added some apostrophes” type of guy, he’s quite the contrary. First to understand his work you need to understand him. He’s one of only African-American designers leading a fashion house besides Olivier Roustieng, who some people racially disqualify for being adopted. Virgil is in the culture, deeper than Marc Jacobs or Kim Jones. He can literally be seen with the rappers and influences who boost these fashion houses sales. Virgil DJ’s, wears Jordan’s, baggy hoodies and skates, Kanye’s best bud. Virgil has tattoos and wears ripped jeans. He’s the modern millennial’s mascots, a designer who doesn’t even touch a sewing machine, using celebrities on his runways and as his public muses. Yea this is all fun, but this is why I and deep-thinking mind regard him as a genius. We as humans are getting lazier and instead of doing our research, we’d rather just give ourselves labels, we’ve moved away from luxury, cursive writing and Prosecco, but more into artisan/contemporary, Futura free fonts (thanks Frank Ocean) and IPA’s. Virgil capitalised on this. The reason why some people don’t like Virgil’s approach is because unlike music when you credit and shout someone in the fashion world, there isn’t any royalties; that person gets temporary buzz and that’s it. Virgil’s genius and trademark - typically been the apostrophes, it was so original and everyone, even me, ate it up. Getting a boot and quoting “for walking” just seemed unreal. We couldn’t fathom why we liked it, we just did, hype beasts ecstasy we were hooked. We’d see quotation marks and our brains would release dopamines of acknowledgment. In this case or meme fashion, our subject doesn’t make a caricature of a pre-existing movement but rather places himself into the internet and makes himself the deeper meaning of his clothing; now when people buy Off-white or Louis Vuitton, they are not buying these brands, but rather apiece of him. Genius. This does on the other hand answer some questions which people did not want to publicly ask. Why was Virgil appointee male artistic director for LV; perhaps not because of his skill but because of his name. The owners and shareholders are fine with this, they had the biggest sale in fashion house history.

Now we have Demna, my favourite designer of the bunch and the real pioneer of the subculture I’ve created called meme fashion. Almost like Virgil he inserted himself into the culture; but he didn’t make it personal. To people’s surprise, Demna does have an Instagram account, but it’s private. Him and the ‘Rapper’s designer of the decade’:Raf Simons launched the ugly shoe campaign. Boom! The Ozweego’s shook the world.

Bang! The Balenciaga Triple s’ went worldwide. Demna single handily made Vêtements an annual PFW must-see, made Balenciaga relevant again, and made young kids shut up about Raf Simons.The sock shoes caught everybody’s attention for how sleek and comfortable it looked. Let’s remember VÊTEMENTS SS20 took place in a McDonald’s and had most of its his garments with high broad shoulders the models looked like the letter ‘V’. Demna is my favourite, I am openly biased. The Balenciaga Instagram page is literally a meme page; it’s pure genius. People who feature on the page post funny pictures with them wearing Balenciaga, creating the need to take pictures in Balenciaga and thus constant relevancy.

The question I do ask myself though is where is meme fashion going? To the younger generation, the only thing keeping us sane during the US-Iran tension earlier this year where the memes about being drafted by the army and how 2020 has literally started with a world war. It’s a way to make serious things seem unserious. It’s modern rebellion, while the generation may have smoked weed and cut up their clothes in riot, that is the norm. The real way to rebel is by not buying into norms and constructs. I believe this way of fashion will last a very long time. Memes may not die but eventually someday it will be boring. That is when I believe this subcategory can lose its hype but until then, Virgil and Demna are going to still dominate from the top.