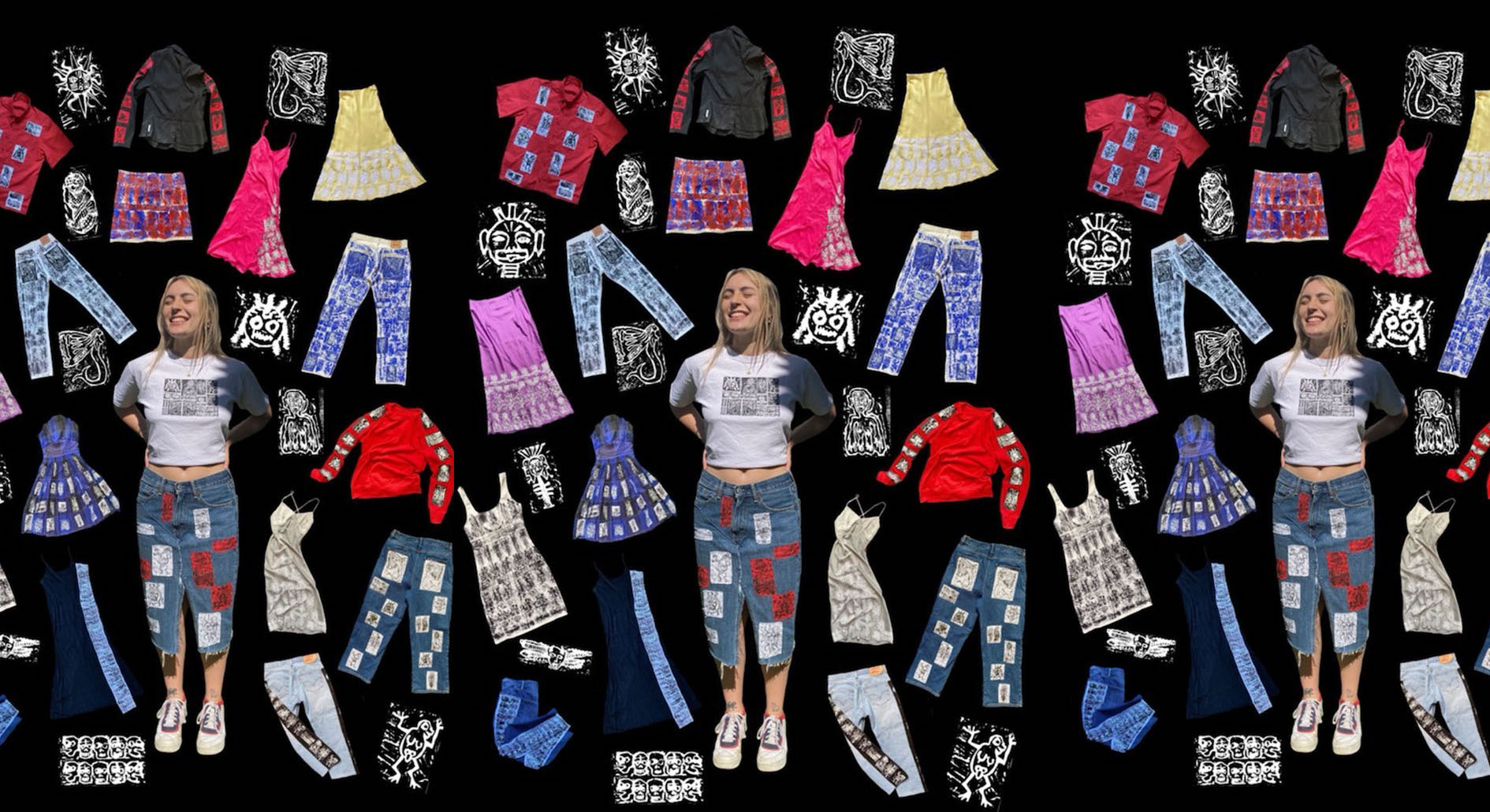 Why did you choose the name cricket eyes?

I chose it ages ago. It was when I was trying to write really melancholy teen poetry and that phrase stuck with me. I realised that when I go around, I'm always looking at things very quickly - my eyes bouncing from up to down and all around very fast like crickets. And then that kind of stuck and then I used it as a brand name. I remember when I was asking my friends what brand name - they were all like ‘clothes for you’ or awful names. I used ‘Cricket Eyes’ because that's what the patches are when you look at them - your eyes move around.

How would you describe what you do - is it fashion design or print?

I guess prints and upcycling old clothes - that’s the idea behind it. I haven't really been speaking about [upcycling] a lot at the moment, but I used to - it was all made against the whole awful side of the fashion industry, which is awful for the environment. They chuck out loads of chemicals with loads of amazing places in the world being destroyed by all of us buying in theWestern world. Especially buying loads of loads and loads of clothes, chucking them away then going to landfill, how much water it creates. So, I was like, instead of chucking away old jeans if they have a hole in it, or something like that, put a patch on it. Everything I buy is vintage, or second-hand and then I upcycle it so yeah, it's the idea that you stop buying new, boring shit from shops which you are going to chuck away in a day.

Can you explain how you make your patches?

So, it’s lino print. I did the drawings ages ago, and then you redraw it on to some lino, just like some plasticky material. Then you cut it out, paint on it and then print on a piece of material. I did it in primary school and remembered it. I went into a charity shop the other day, and they were selling loads of old pieces of material - I think it was clothing that they couldn't sell and cut up. When the charity shops open again, I want to try and make  my brand even more ethical because at the moment, I'm buying fabric from fabric stop shops, which is better than nothing, but it's still bad. So, I want to start using recycled material and things like that.

Well, at the moment I'm making loads of new patch designs which I haven't done in ages. I started this brand a year ago and they were just some lino prints which I made based on masks and a lot of like Eastern designs -outside art, which is art done by people who aren't deemed as artists. Definitely going to the British Museum as boring as that sounds like looking at masks, things like that - just imagining things in my mind. For the next series of patches, I'm doing them inspired by Greek myths. I was also looking at some fairytales because it helps to have a basis of ideas to, bounce off of, so like anything: music, books, films. Every time I do art, there's something in the background - a podcast or music, I'll bounce off ideas from that.

who are your favourite artists?

There are loads of artists who I love like a photographer called Francesca Woodman, Paula Rego prints, Goya’s prints as well. Oh, Käthe Kollwitz- she's great. She actually does lino as well as hers are actually woodcuts.Her stuff is amazing because she does portraits. It's very different to mine, but I just love it. I'm trying to find out about more printmaking artists, my dad bought me this book by some guy called Eric Gill who does prints. So, printmaking artists or Goya.

Are you going to university or art school?

I don't know. I've applied to university three times and then I applied again this year. I finished school last year and was going to do a foundation but changed my mind last minute and applied to do Anthropology and World Philosophy at SOAS. Then, I changed my mind after coming home from travelling and apply to Art and got into Glasgow, which was really sick but I hated it [the Art school], it is awful place, reminded me of prison. I had some weird like physical reactions to that place that was like, I didn't want to move. And then now at the moment, I think I want to go back to my original pace that so as, but I actually have no idea. So, if I'm being honest, I'm probably gonna have another year out. Or, maybe I won't go. Who knows?

what is your long-term goal?

I think, my end goal, like the end of my life, would be to be an artist. I've accepted that I don’t need to rush - how would I be making my best art when I'm 19 years old? I don't really have anything to say. Most amazing artists become who they are when they're quite a lot older. Georgia O’Keefe and people like that get into painting when they're 40 or 50. At the moment, I love to just, fuck around, see what I really like and hopefully I'll fall into something which I love but I like the idea of being an artist.

Are there any particular themes in your work?

A lot of my artwork and what I do is a lot of strange creatures and mythical beast, I just make up. It's the things inside us which maybe we don't talk about - all the strange thoughts, all the strange little like demons and things which we have inside and then put them on clothes. That's where it kind of starts, I think, the little demons which we all have in us.

How has growing up in London impacted your creativity/work?

Probably a lot. There’s a lot of culture in London, just being able just think -oh my god, I can't think of any ideas and just get up and goto one of a million galleries and they've always got something different on that's inspiring. Also, there’s just a vibe in London, I think any city really, there's so many artistic and creative people that you see on the train or around. It's just interesting people, interesting conversations. Lots of colours, lots of noise everywhere - I don't know how you couldn't be inspired by something by living in a city.

What would your advice be for other teens who just want to do art and are unsure about going to uni?

What my art teacher said to me, which I've always kept in mind, I had the two most amazing teachers in the world who are like mentors in everything. And one of them said to me - 'who wants to be making their best art when they're 18 years old'? I think that's what I would think. I'm quite harsh on myself when I make something and I'm like - what does this mean? And think you would never see this on a wall of a gallery or anything like that. I would say just fuck about - don’t restrict yourself. I see people our age who already have a style of art, which is so confined. And I don't know if it's really genuine but other times I just think, why don't you just do something completely different? All of your art, I think, should look really different and try a million things. Don't be forced to go into uni, is not for everyone, or wait five years, wait 10 years and then go. Nobody knows what they want to do at this age really.

'who wants to be making their best art when they're 18 years old'?

You were featured in the Royal Academy’s Summer Exhibition last year; do you mind telling us a bit about your piece – ‘The Vulnerable Man’?

I entered it because my school was like – just do it, we need someone to apply and nobody can give in their physical work (due to A-level marking) and I was one of the few people who made a film. My whole project was about how we protect ourselves from being vulnerable. He’s wearing this big suit in the video where the ‘vulnerable man’ is protecting himself in a layer of things so he doesn’t have to be vulnerable to the world because nothing is going to attach him whilst he’s wearing a suit. Through the video he’s dancing more and more and more and he’s letting go of his vulnerability and so his suit starts to fall away. Once you stop trying to protect yourself from the world, life actually becomes a bit more fun.

I know this is really obvious, but Miyazaki inspires me a lot with all his strange creatures. When I think of my favourite piece of art ever, it would probably be the film ‘Princess Mononoke.’

So, if there was one thing that people should watch, you would suggest that.

Yeah, 1000%. Everything about it is just genius. It's got morals because it's about looking after the environment, it's beautiful, it’s aesthetic, it’s an amazing story and so inventive. I love it. 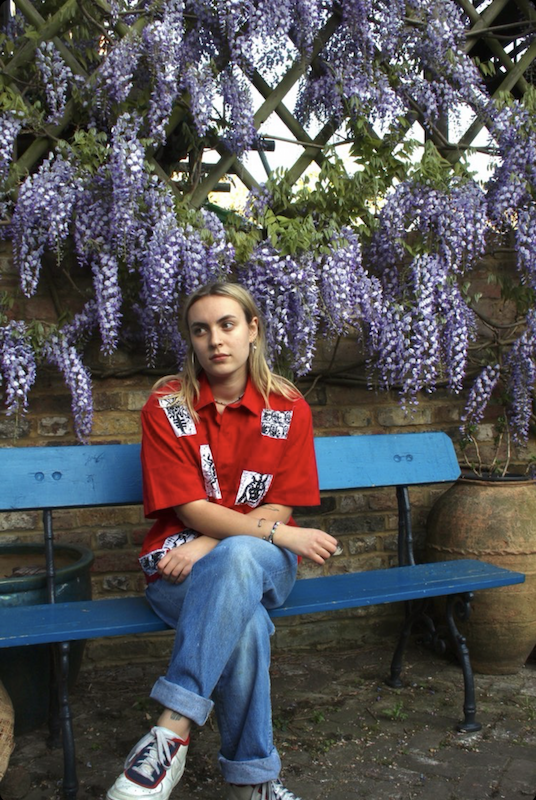 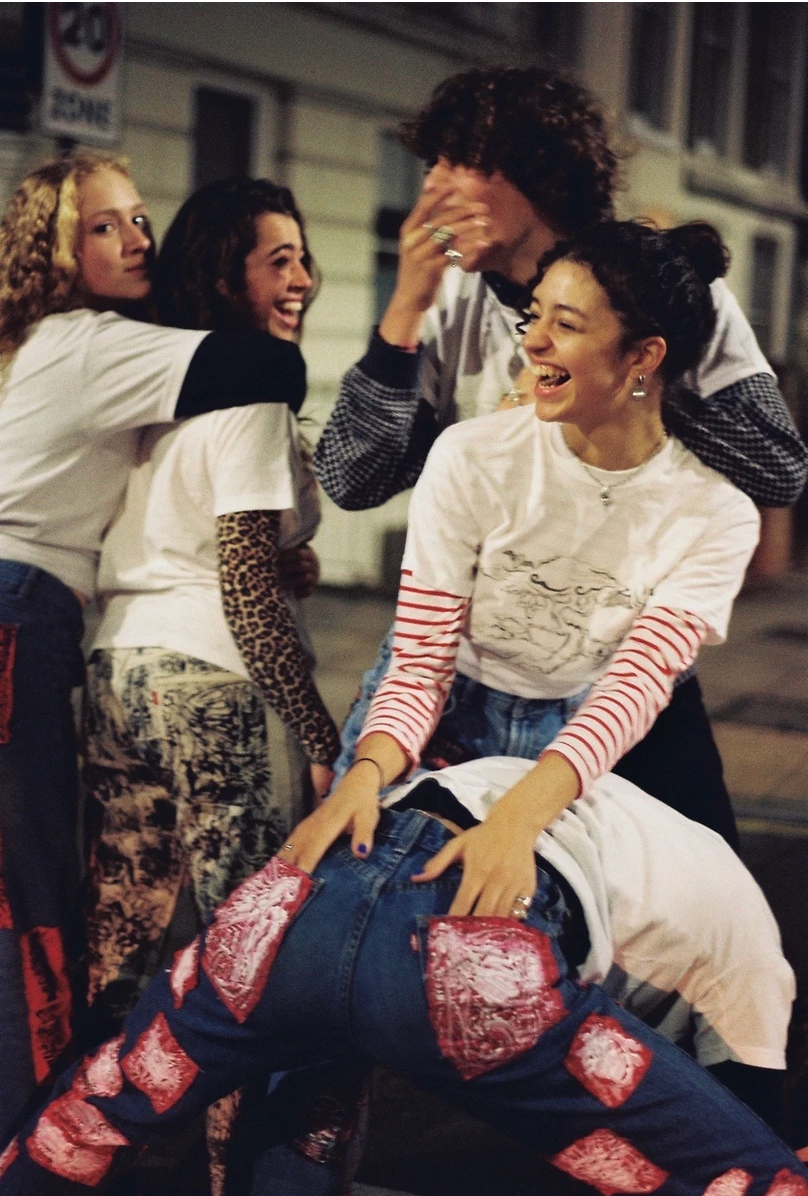 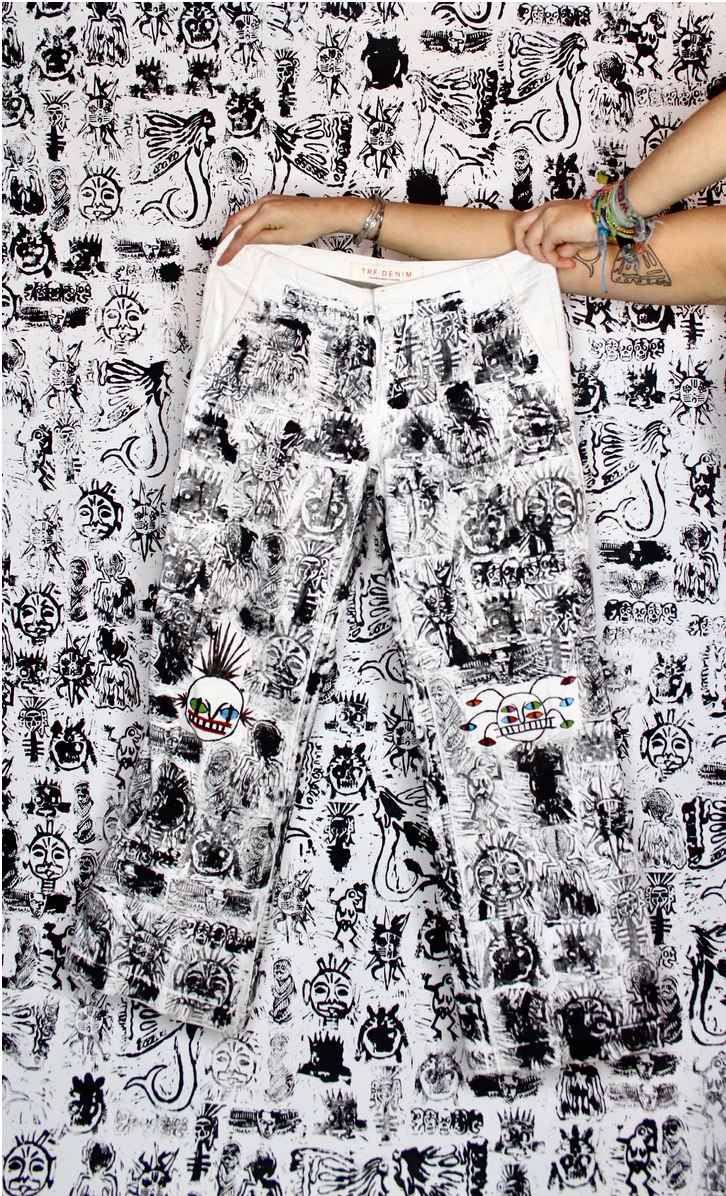 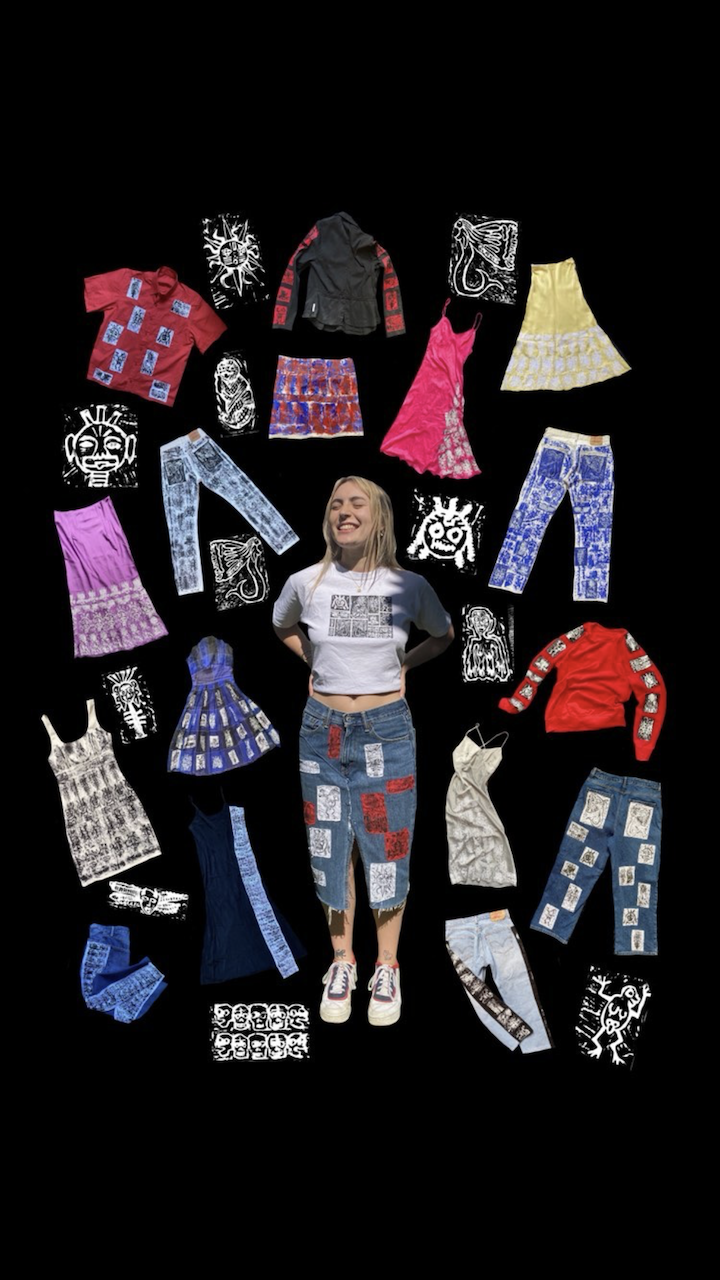 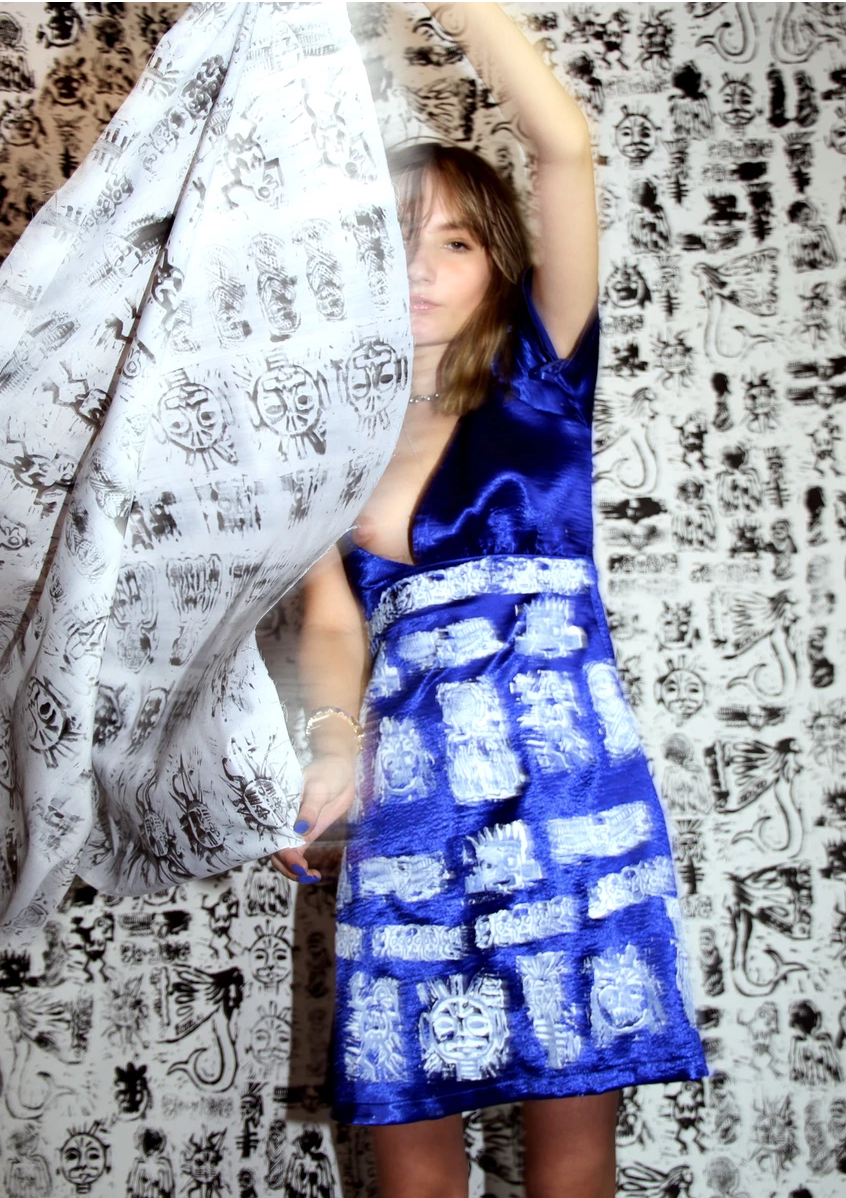 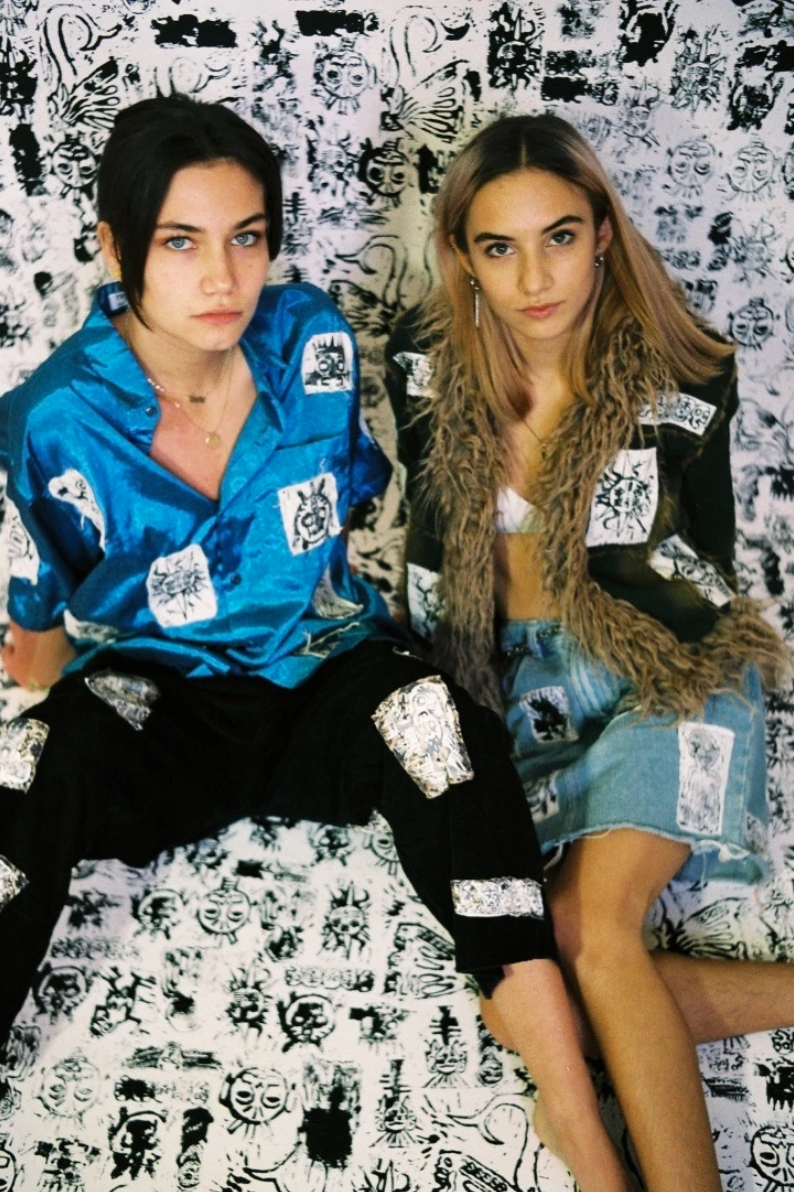