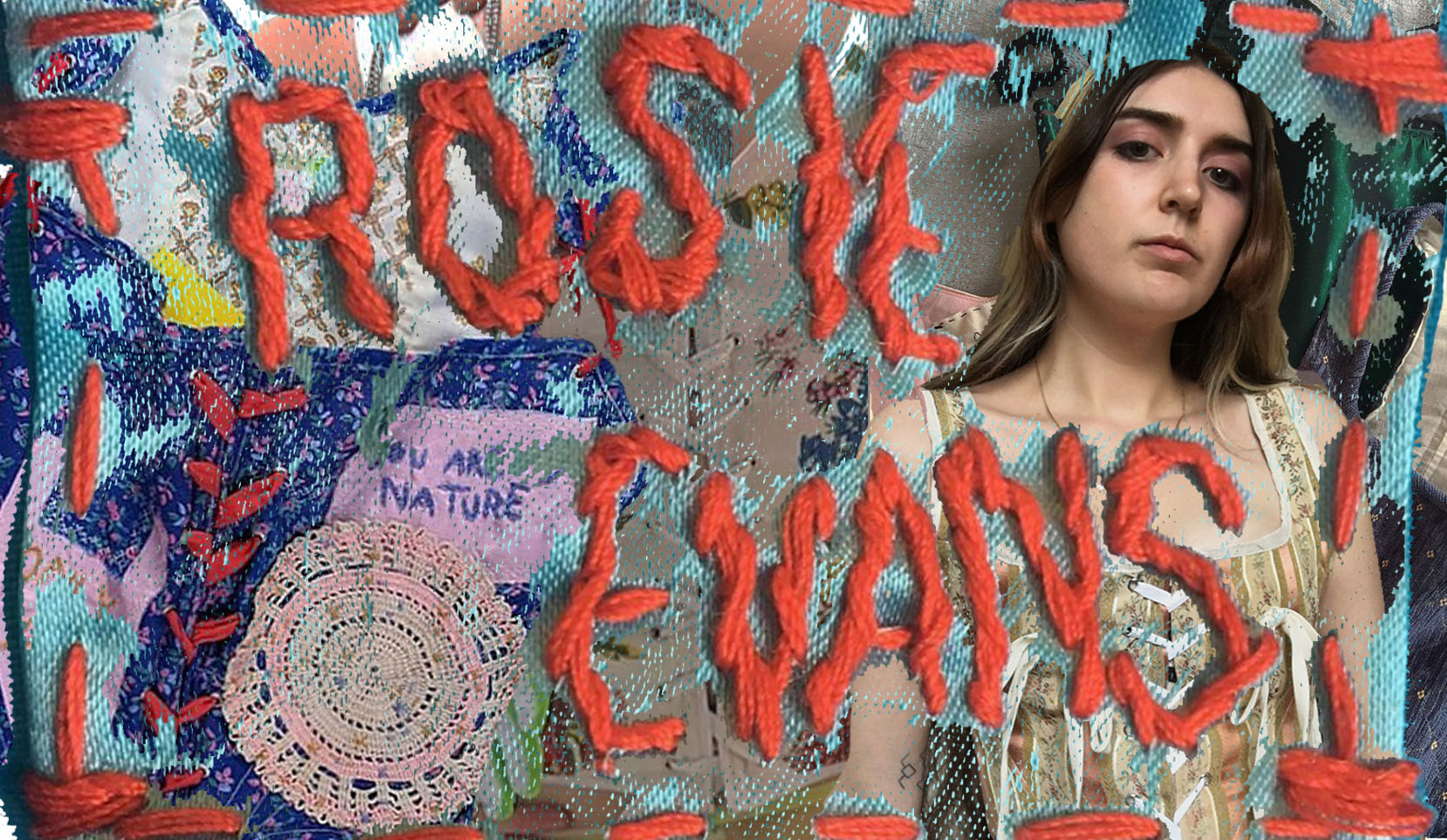 Rosie Evans is the high fantasy brand creating sustainable and other worldly pieces from second hand textiles and vintage found fabrics. With aims to inspire customers to shop consciously, each garment has an emphasis on individualism and traditional craft.

During my final degree at uni I wanted to look into historical clothing but was doing knitwear at the time. I was looking at this poet called Dylan Thomas - he was a Welsh poet who my grandmother use to know when she was really little and so it links to my family history. One of his poems is called ‘The Dress’ and it has this amazing description of clothing and bodices but it’s quite a dark poem as well. I bought this corset at uni to do patterns from, I never used it but I still wanted to keep going with patterns so I started to look at my uni work and was re-doing my work for portfolios and I decided to do a mini project with the corsets and after that I just carried on making them and people were asking to buy them so I started selling them.

Do you mind telling us where and what you studied?

I studied fashion and textiles at UWE, which is Bristol, it’s quite a small uni with very small classes which was nice. It wasn’t a big name uni so there wasn’t a lot of pressure on us - we could do whatever we wanted. I specialised in knit (you still had to do everything else) but I focused on knit in second and third year.

A lot of poetry and literature. This season was inspired a lot by Shakespearian poetry and adaptations such as Derek Jarman’s adaption of ‘The Tempest’ and some Elizabethan style corsets. There is also an erotic version of Chaucer’s ‘Canterbury Tales’ made in the 70s which is really funny and really weird - I’m just obsessed with it! It’s made by an Italian director but it’s just one of those crazy films from the 70s. It’s a big inspiration and quite fun - that what I like about Shakespeare and poets that people think are really intellectual, some of it is just stupid and cheeky.

Do you have a favourite Shakespeare play or poem?

‘Much Ado About Nothing’ that’s a good one. I also really like King Lear and Macbeth.

Drama, Art and Textiles and in Wales you have to do the Baccalaureate.

What is one film everyone should watch which has really inspired you?

Recently I watched ‘The Souvenir’ with Tilda Swinton. I think a lot of classic British films are really great. I definitely recommend ‘Heathers.’ It’s a dark comedy and one of the inspirations for my graduate collection was ‘Human Traffic’ which is a film about 5 friends on a night out in the 90s made in Wales.

I’ve always loved Jean Paul Gaultier because he’s so good at dressing women in a sexy, empowering and fun way. I think people forget you can dress really empowering and be light hearted about it. His designs are beautiful, and I try and collect his pieces when I can.

Louise Bourgeois I think she’s really cool. I listen to interviews of her because she’s just really intelligent in quite a feminine way. She doesn’t use very academic terms but just very intelligent.

If you could pick one person that embodies your work who would you pick and why?

Lydia Bennet - the one who runs off with the hot soldier and ruins everything because she’s quite frivolous and stupid but also in-charge of what she does. In the end, she gets what she wants. I think that’s the spirit of it - you can wear something quite stupid but that doesn’t reflect who you are. You’re not stupid just because you want to wear something extra.

When was the moment that you decided you wanted to pursue fashion design?

I wanted to go into costume before my final year at school as I did theatre and drama. I thought I like theatre and sewing so I’ll just go into costume. In my final year at school, I did two costume projects and was like - I don’t want to do this anymore I want to go into fashion because with costume there was so much pressure to make someone else vision. That was when I was like maybe I should do fashion as I can make whatever I want.

How has growing up in Wales influenced you?

It’s quite a creative country. I think there is also a sense of not being wasteful because in Wales there isn’t a lot of resources and money. You have to make do, for example, in London I wouldn’t go into fabric shops because you just have to find what is there and a lot of that is second hand, used or end of the line. You couldn’t just waste fabric and get more. So, I think it did install using what’s around and not being wasteful, being creative and learning how to problem solve when you don’t have all the resources.

Being a sustainable and anti-fast fashion brand, what do you think the fashion industry should do to be more sustainable?

I think it definitely needs to be more transparent because I’ve worked with companies that say they are sustainable and promote themselves as being sustainable and yet I know maybe they are using sustainable fabric, but their practises aren’t as sustainable as they are claiming to be. It’s not their fault entirely, they are told if they use a sustainable fabric then they are sustainable. I think there needs to be more clarity on what sustainable actually means and definitely not just relying on buying more fabric all the time. You shouldn’t be able to print, order and buy fabric. We are living in an ecological crisis and just using organic cotton is still wasteful and bad for the environment. Also learning the value of making clothes. If brands were more honest in the pricing. I worked for Ashley Williams in the winter and the hairpins everyone was like ‘why are they £100 for a hairpin.’ In reality they cost a lot to make and we have to sell them. If there was more transparency in the chain of money and how much it costs to make and if something is really cheap it probably hasn’t been made ethically and sustainably.

Can you tell us a bit about your internship at Ashley Williams?

It was really good I was part time interning. I started in November and was there until their show in February. I would go to factories and learn a lot from interning like how a business is made. I definitely recommend going there, they are really good at explaining how to do things.

What are your long-term goals?

It’s quite a hard time at the moment as obviously I don’t know when I’ll be doing things but I’m really hoping to launch the shop asap, having this collection out and then planning the winter collection (which might have to be done here in my bedroom). Hopefully, this year or next, I’ll get a studio and seamstresses to help me because at the moment I have one seamstress who is helping me and a girl who I pay to do. Hopefully I can start employing people and get a business started.

Are you hoping to eventually show at LFW?

No, not really. I’ve been to LFW and it's lots of fun, but I think the way the world is now, you don’t need a fashion show to get publicity. You can get in Vogue without having done a fashion show. Obviously, not everyone can, but I think so many designers pay a ridiculous amount of money for a 15-minute slot. I don’t think it’s very good for young designers. I want to save money to build the business and put into the clothes and practise.

You are stocked at the amazing concept store 50m, how did that come about?

I was really lucky because I hadn’t been looking at stockists and it was quite a good shock. They sent me an Instagram DM asking if I had an email and then they asked about stocking some corsets which was really exciting. They wanted to get corsets for 2020, as they knew they were going to be really big and my brand is sustainable and handmade which is what they wanted. I went along and they just picked 5 from what I showed them, and they sold out really quickly - within a week and said that that didn’t happen very often. That was really cool but because I’m  handmake the corsets it’s a very small numbers that go to 50m.

What your advice be to people who want to move into fashion design?

Definitely think about what design you're into, as at uni, it's quite easy to get distracted by what other people are doing or what your tutors like. Definitely have an idea of what clothes and designs you want to see in the world and research into designs you like and why you like them, what makes them similar, what makes them different and find the thing that makes you tick. Don’t be afraid that everyone in fashion is really mean. They really are not that mean; some people are but not all of them. If you have enough drive, you can get further than you think. A good attitude is really good to have and a lot of people I know who are doing really well is because they keep pushing and have the attitude that they want to do it

For more check out: https://www.rosieevans.online/ 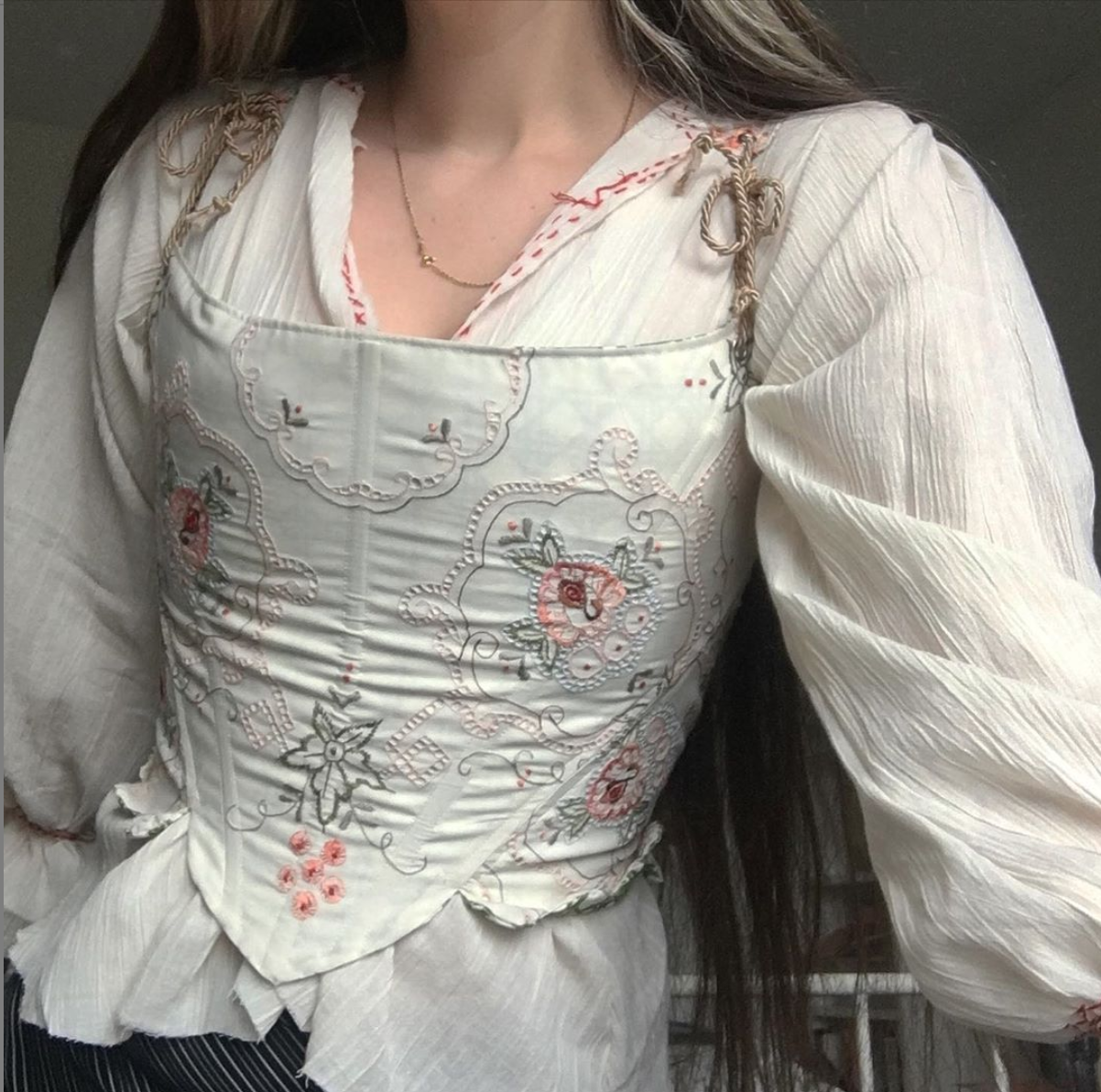 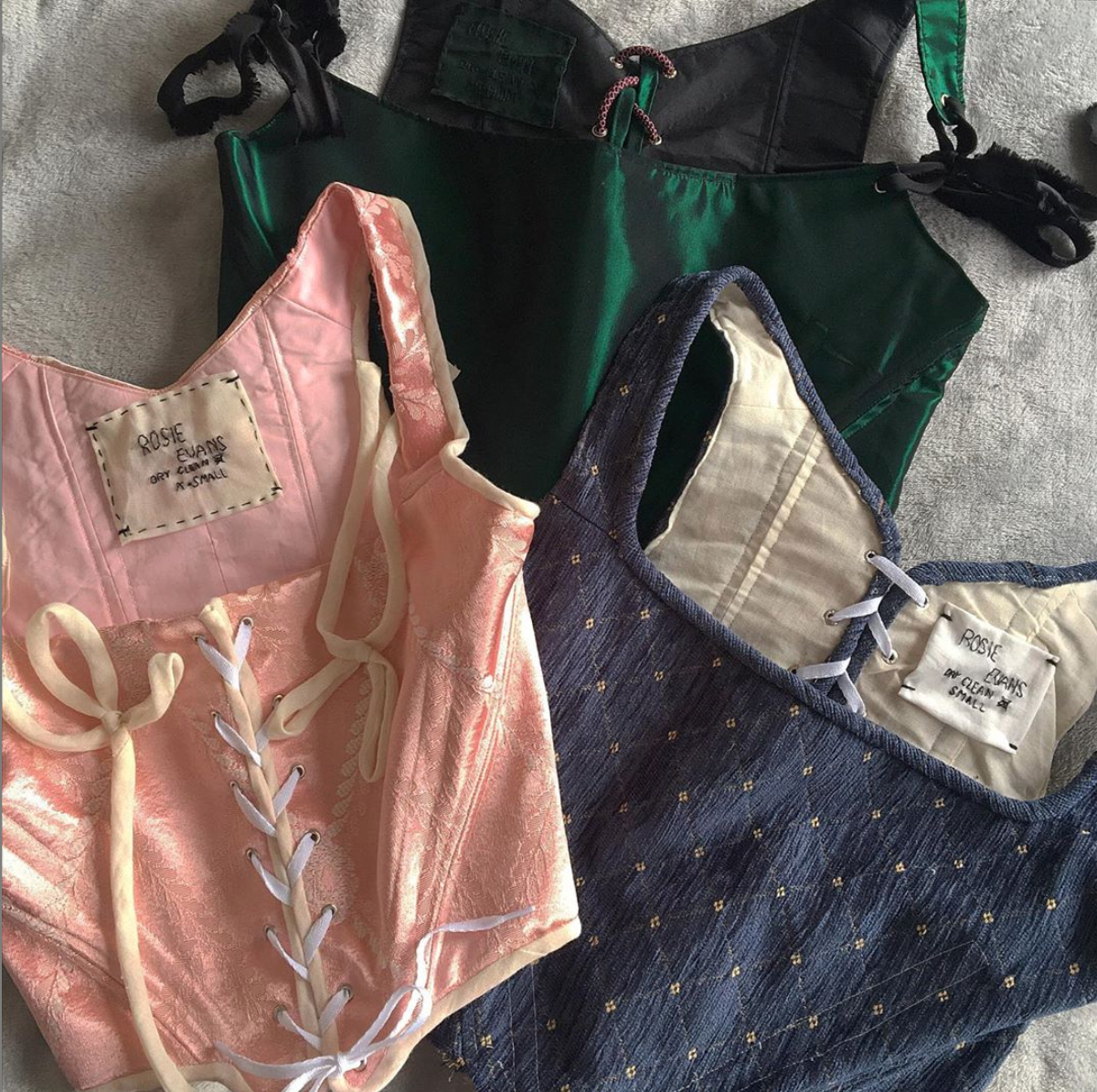 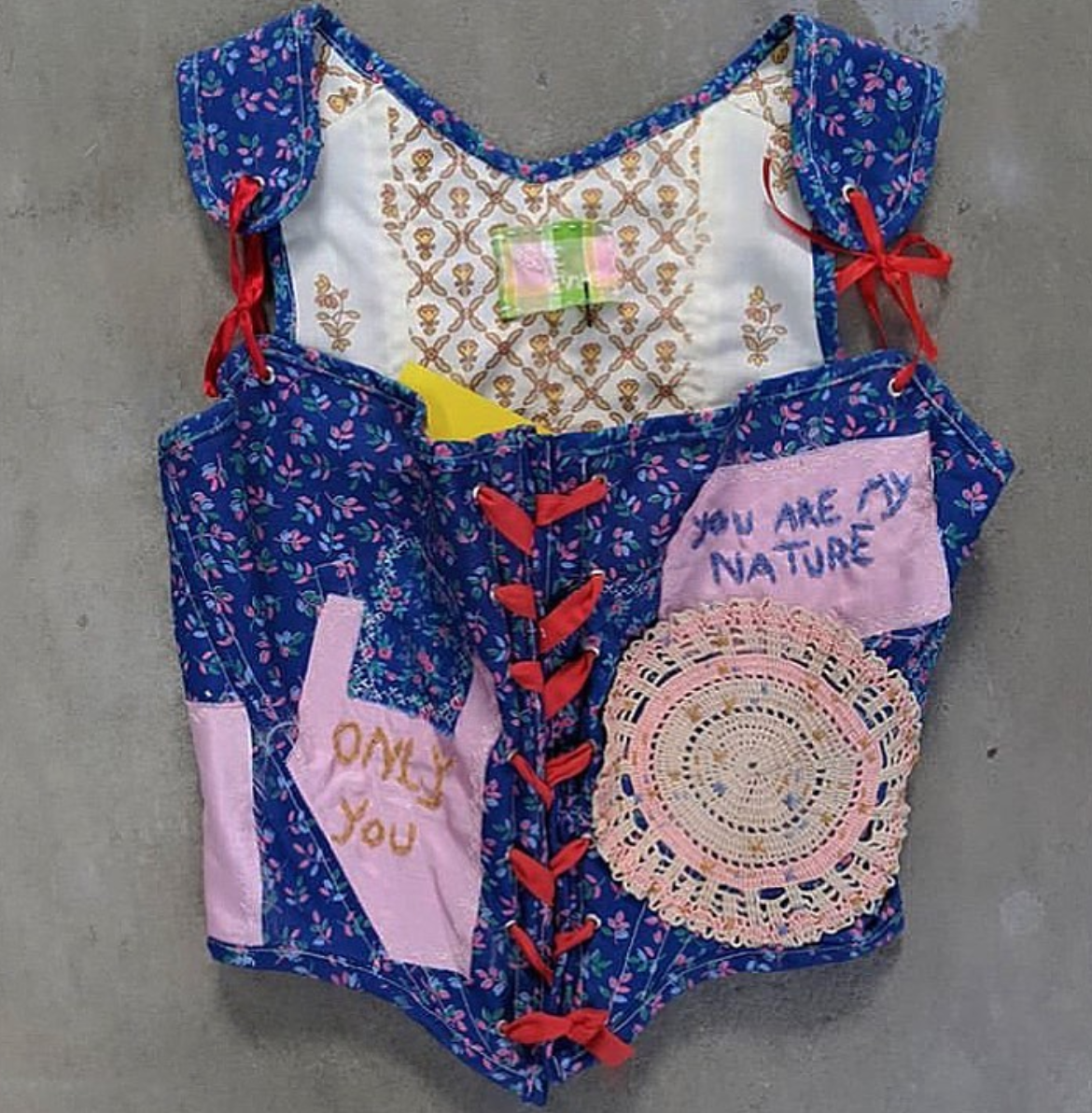 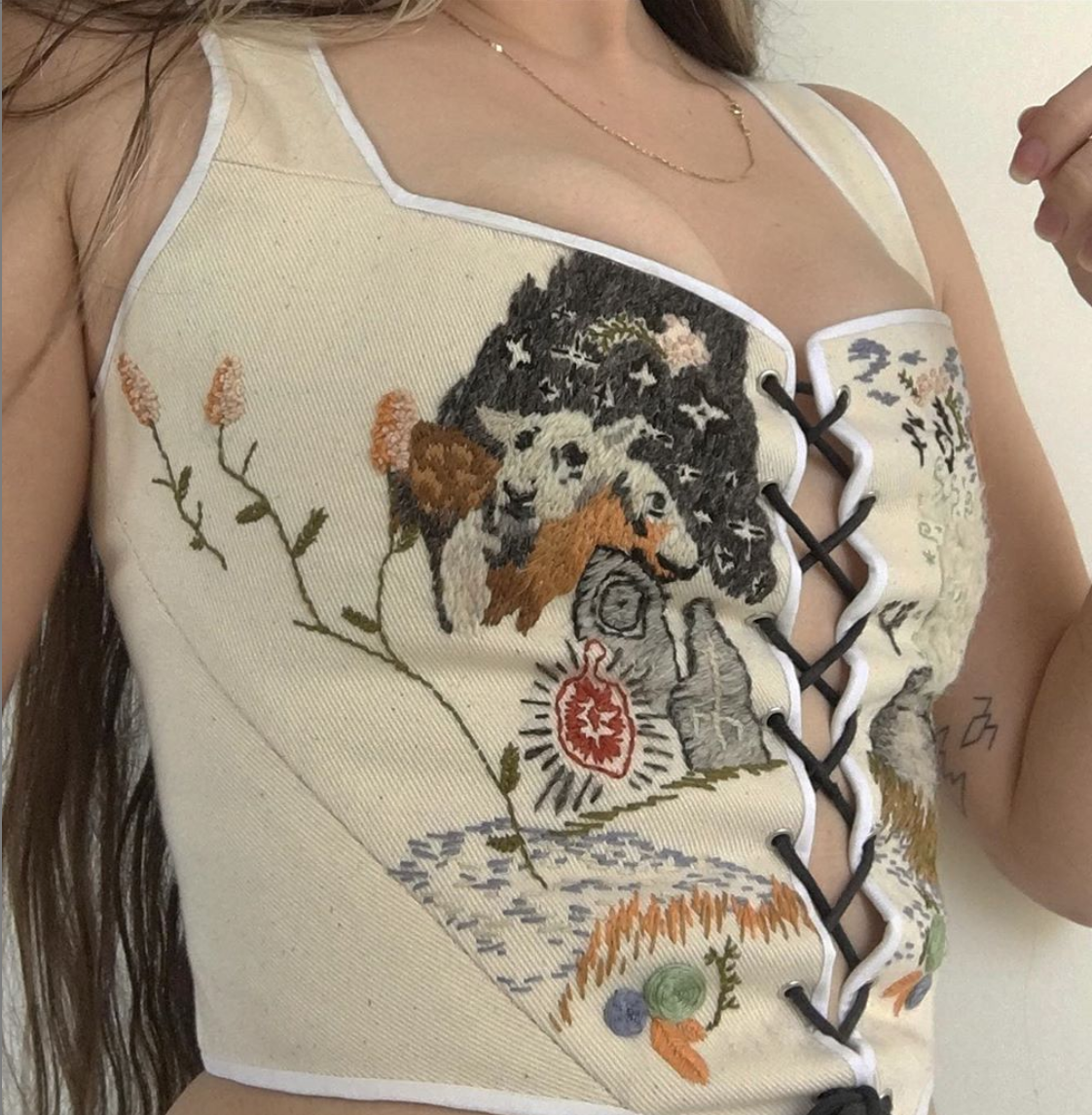 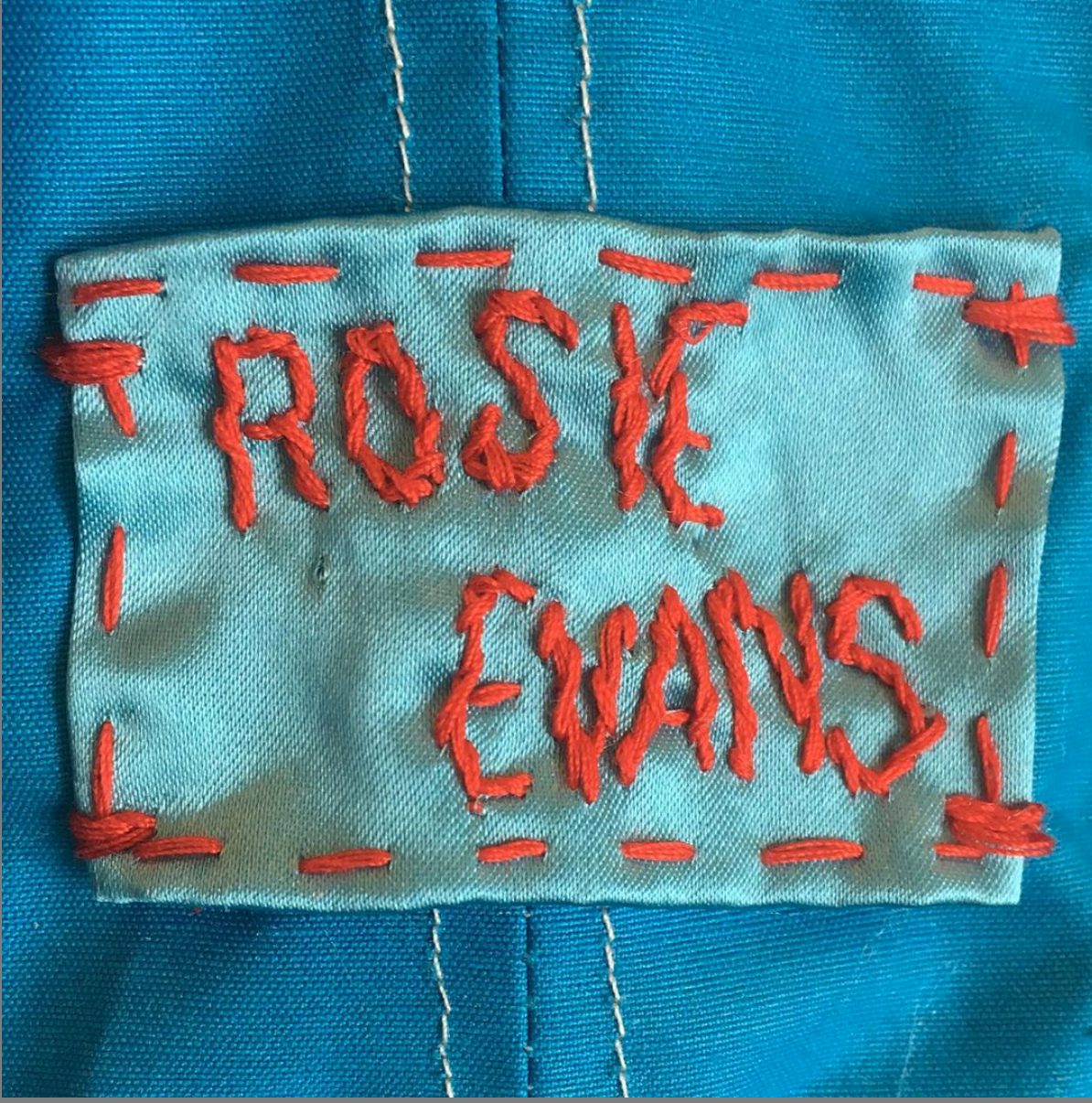 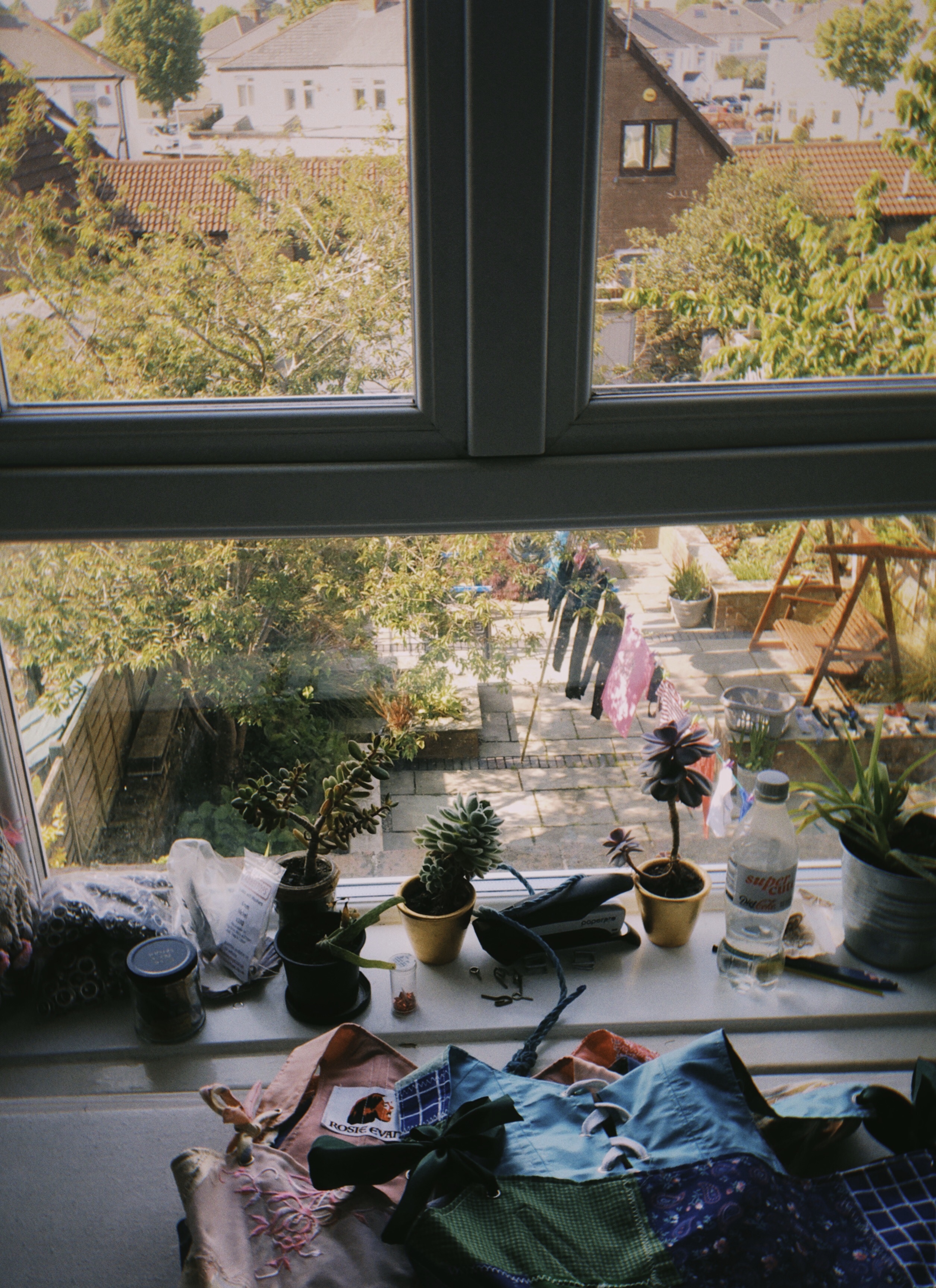 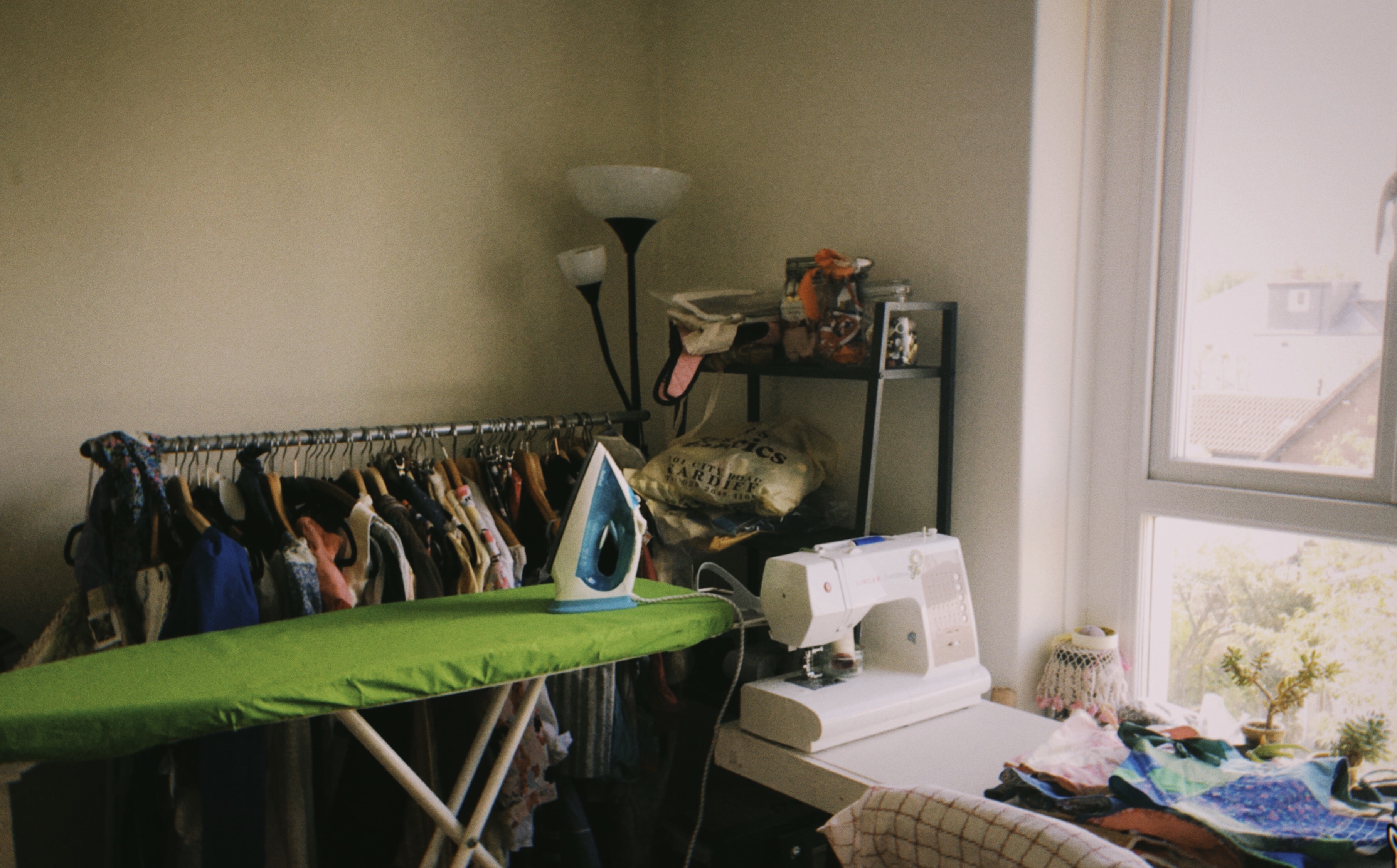 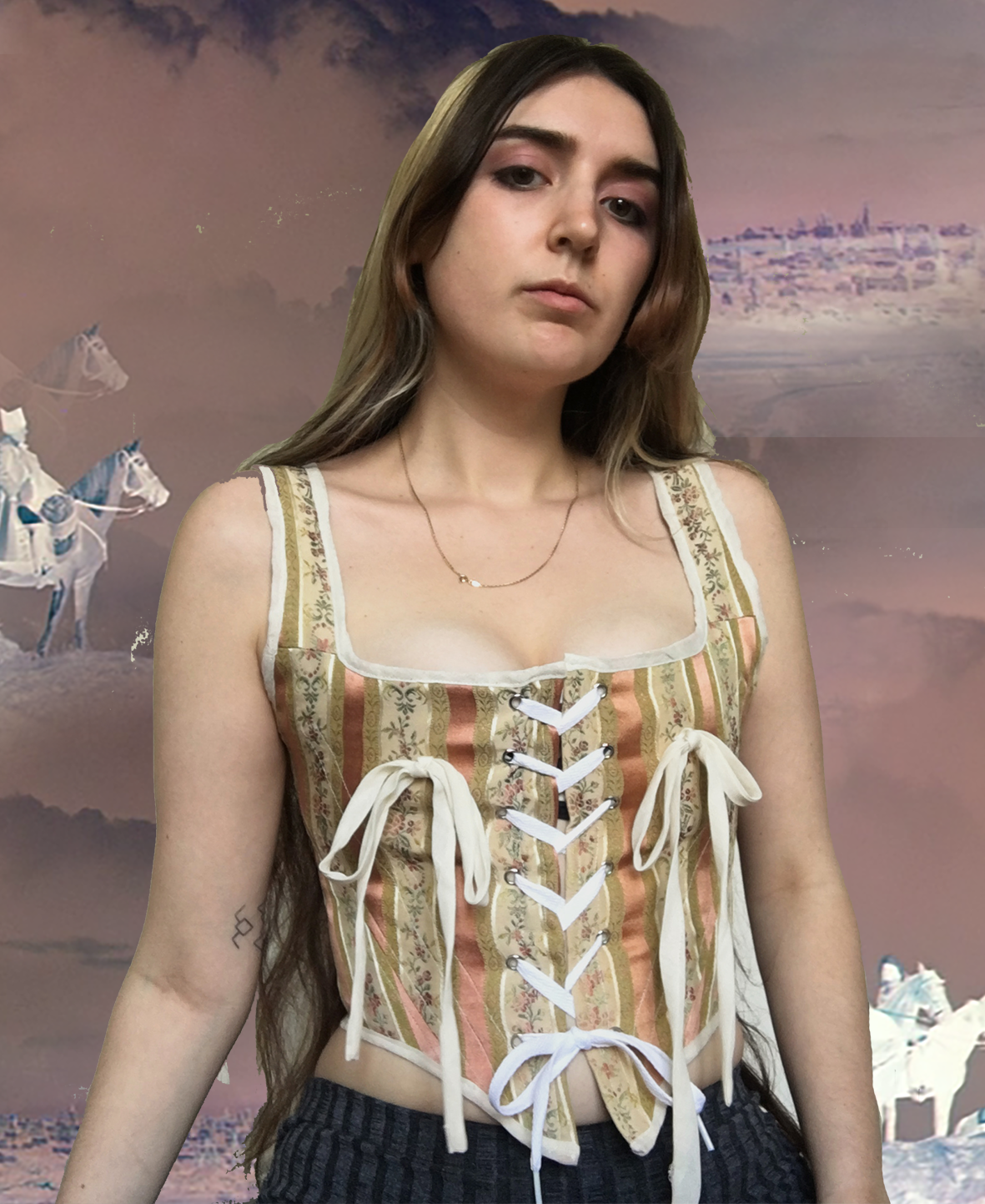