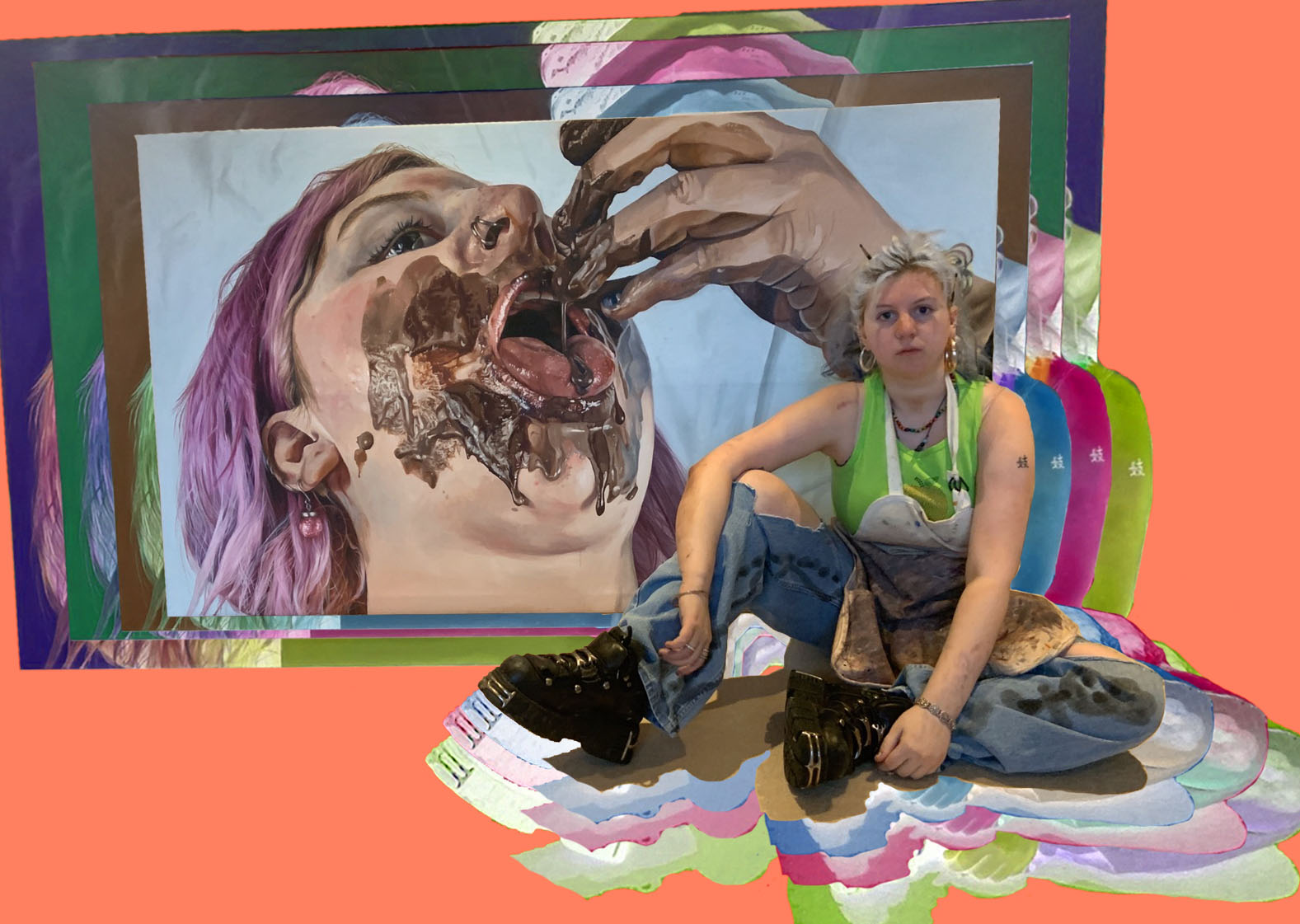 what a-levels are you doing?

how would you describe your work to people who haven't seen it?

Quite realistic but expressionistic.

I go to lots of museums and ever since I was little, my mom and I have gone to the National Portrait Museum every year for the BP Portrait Award. I've literally always been obsessed with portraits. I love like really big faces.

Have you ever entered any competitions?

Yeah, there was this summer school in London - LARA- London Atelier of Representational Art and I won first prize in that. Then because normally the summer school is like thousands of pounds and I won a two-week course or something. I'm going on the Sky Portrait Artist of the Year. I was filming two weeks ago, but it got cancelled because corona. I went last year just as a member of the public and was like why not enter?

You mentioned that you want to take a gap year and then go to Art School, do you not want to do an Art Foundation?

Where would your dream school be?

After art school, I probably want to go to Slade or somewhere. At first, I really wanted to go to Glasgow but then I recently read loads of bad things. Anyway, I have my gap year to decide but just one of the best ones.

Who are your favourite artists?

I find a lot of artists on Instagram that I really like, there’s this one called Emma Leone Palmer who is amazing and does really good faces. Also, Harding Meyer. I love Basquiat, obviously it's not my sort of art but I just love his work.

Artists such as Jenny Saville, have quite strong themes in their work, do you feel like your work has any themes?

Yes, well I mean, it's hard because obviously I've had school but when I'm a proper artist I want to focus on certain things. I do commission's which isn’t what I really want to do, but gotta earn money. For my recent art project it was all sort of inspired by Jenny Saville. I had chocolate all over my face and stuff. It was all about comfort eating and not making it a really grotesque thing. Due to the fact it was a self-portrait, it was just exploring my own inner being and my association with stuff like beauty.

Did you have a particular moment growing up that made you decide you want to be an artist?

Not particularly it's really weird. I've always wanted to be an artist ever since I was really little. My mum said that when the little girls were saying they want to be princesses, I just had it in my head that I wanted to be an artist. I used to watch YouTube videos when I was little of how to draw to sort of train myself that way. But not really, I've just always loved it.

Have you ever had a teacher that's really inspired you or really encouraged you or have you been self-motivated?

I mean, all my art teachers that I've ever had have been great. I had a really good one in prep school. I went to this art class when I was around 11 or something, and I'd go every weekend. I think because the lady there was so passionate and stuff, that was when I was fully like - ‘this, is my thing.’

Firstly, after this year, hopefully, I can go on a gap year. Then I want to go to art school, either Glasgow, Edinburgh, or Camberwell, somewhere like that, and then hopefully, make my way as an artist.

Do you have any fears in becoming an artist as it’s quite a hard job?

I'm quite realistic about it because I know it can be really hard. I know it’s gonna be really hard to be successful and I'll probably be broke all my life but that's what I want to do, you know? And I've got backups like an art teacher and then do my own art on the side if I literally can't make any money. But I'm realistic about it, I know I'm not gonna be a billionaire.

There are so many disparities between female and male artists. Do you have any ideas of how you're going to try and change that, or have you just accepted it?

I just want to bring it back to fucking good art. Not just a sock or something.

Do you have any tips for teenagers who also want to be artists?

Just do it all the time, practice so much and enjoy it. Also, find what drives you and your passion. With me, I was so obsessed with portraits, that's what I did. I searched up hours and hours and hours of videos of how to do this, just so I had the basics. Also just having a sketchbook with the weirdest things. It's all about just doing it all the time.

How has your environment/location growing up influenced your work?

Well, I've grown up around Brighton most of my life. Most of my friends live in the Brighton area. Obviously, that's only a 40 minute train to London People say where you grew up sort of influences who you are. It really has, because Brighton is such a crazy and arty place, especially in the summer. There's just so many little things, my friends and I will go to underground little galleries of artists and stuff.

For more check out Hattie 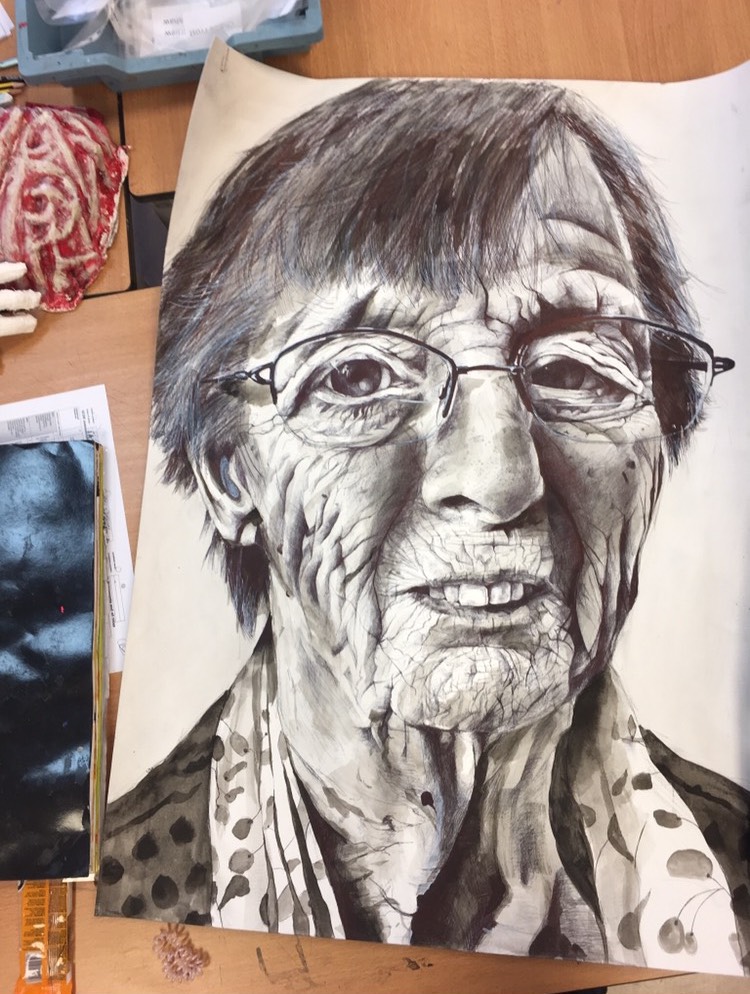 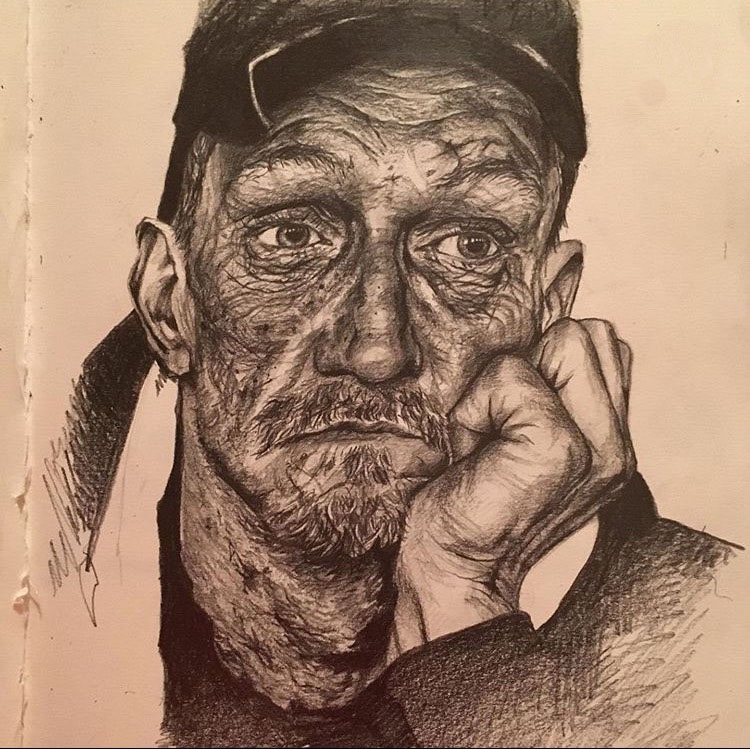 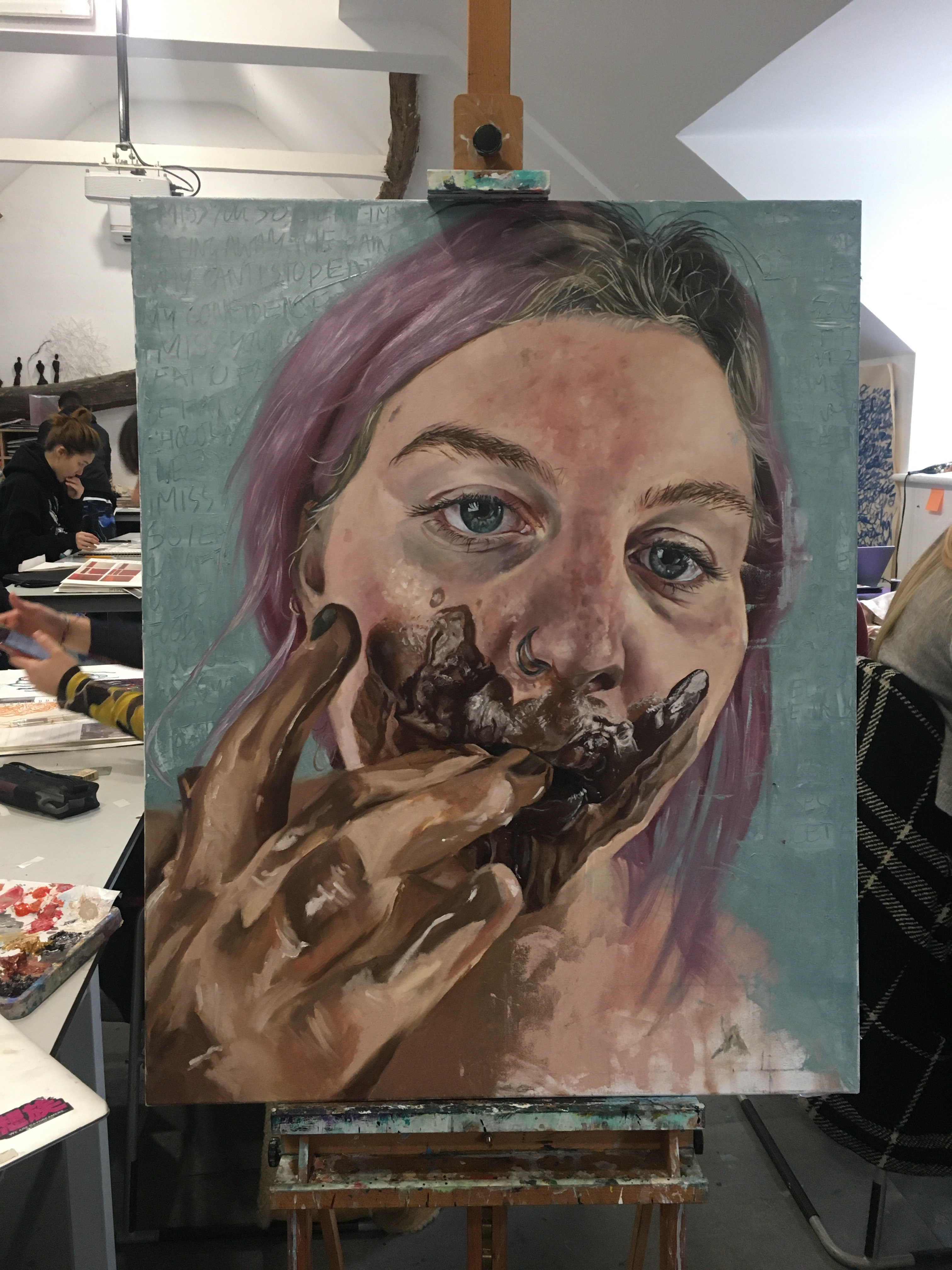 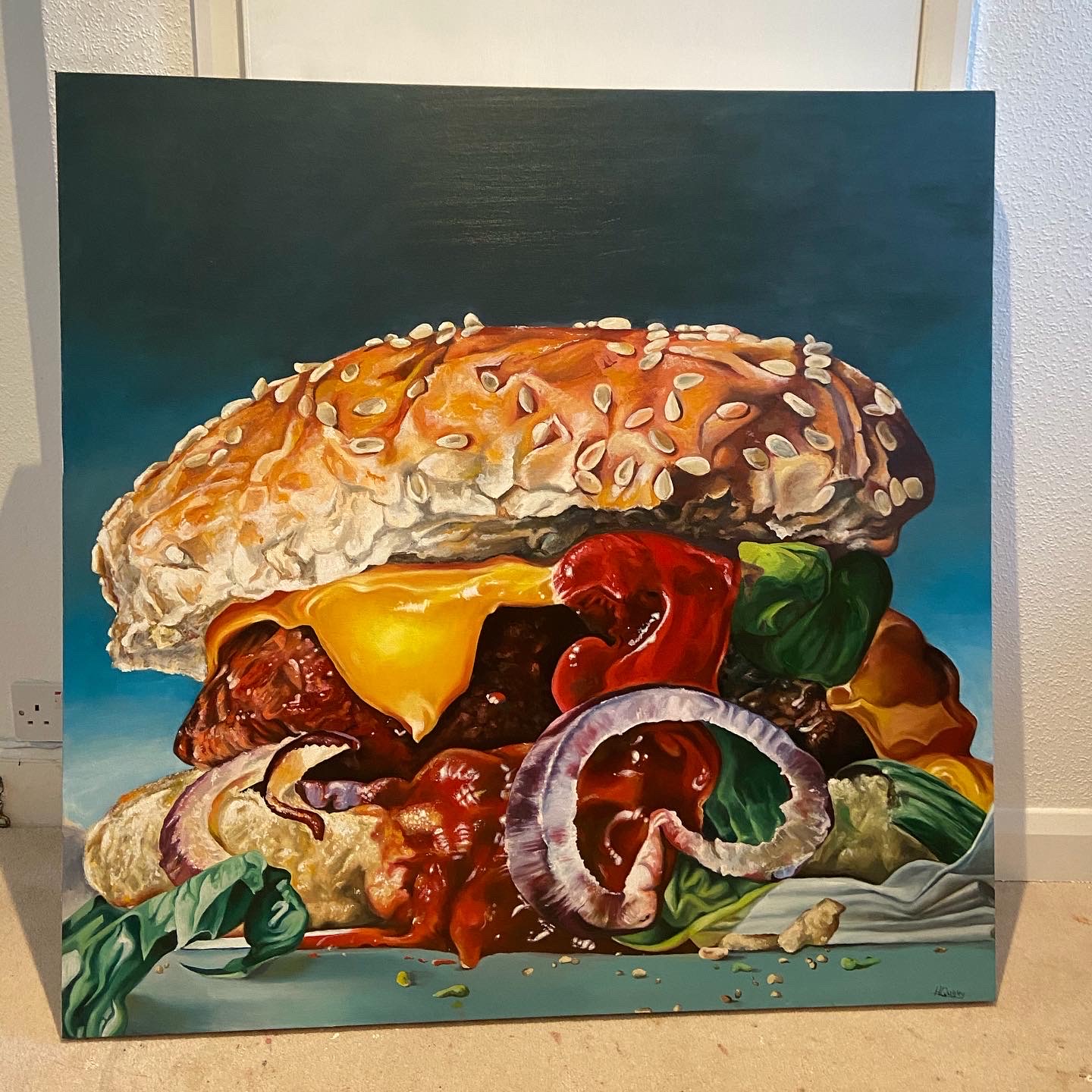 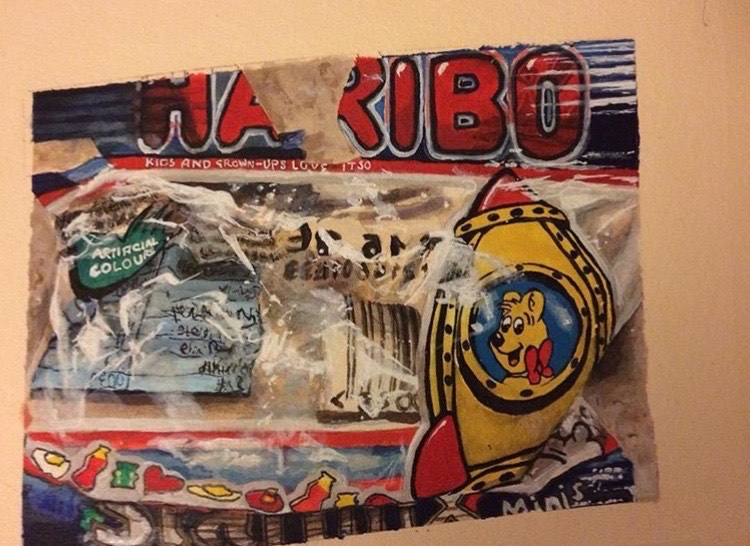 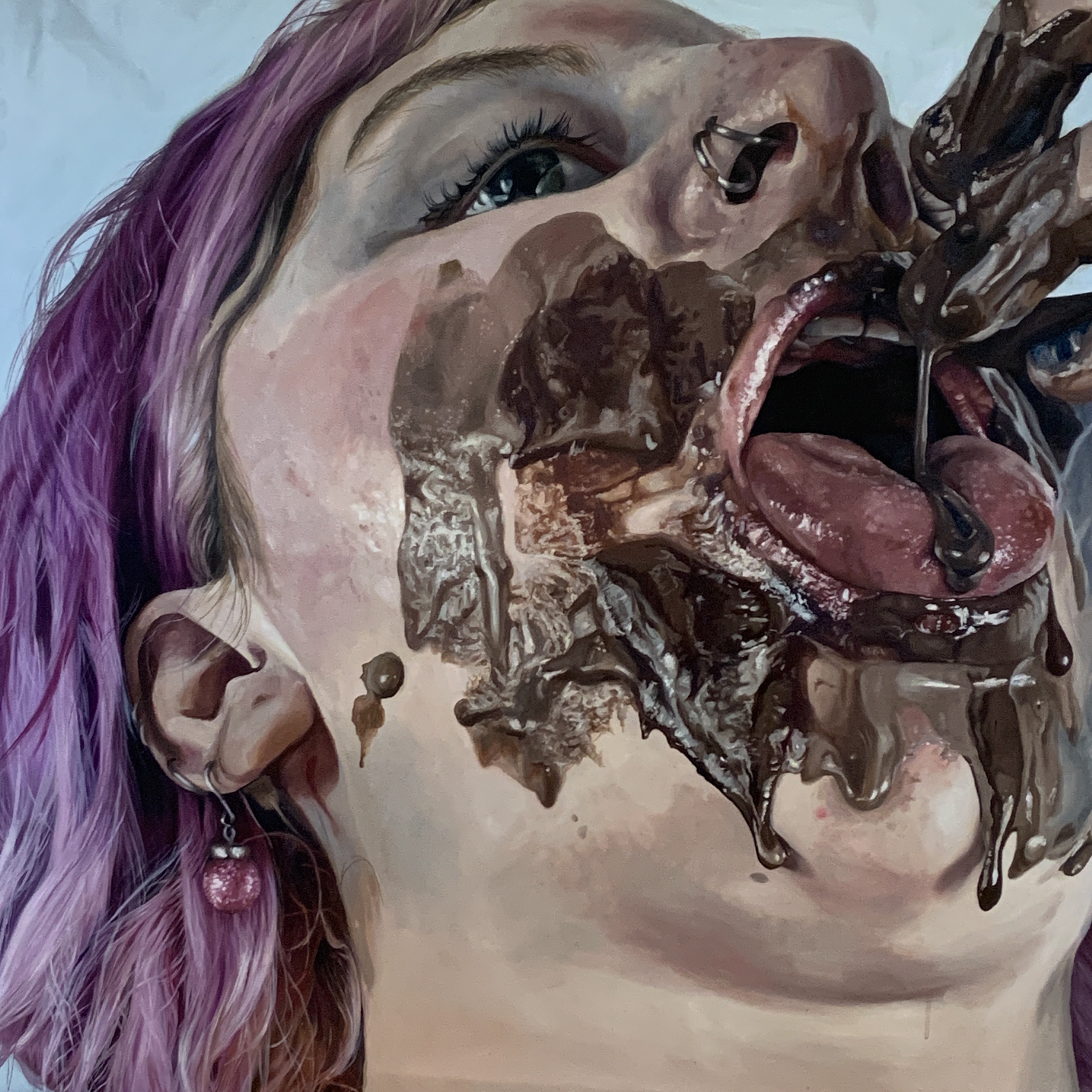